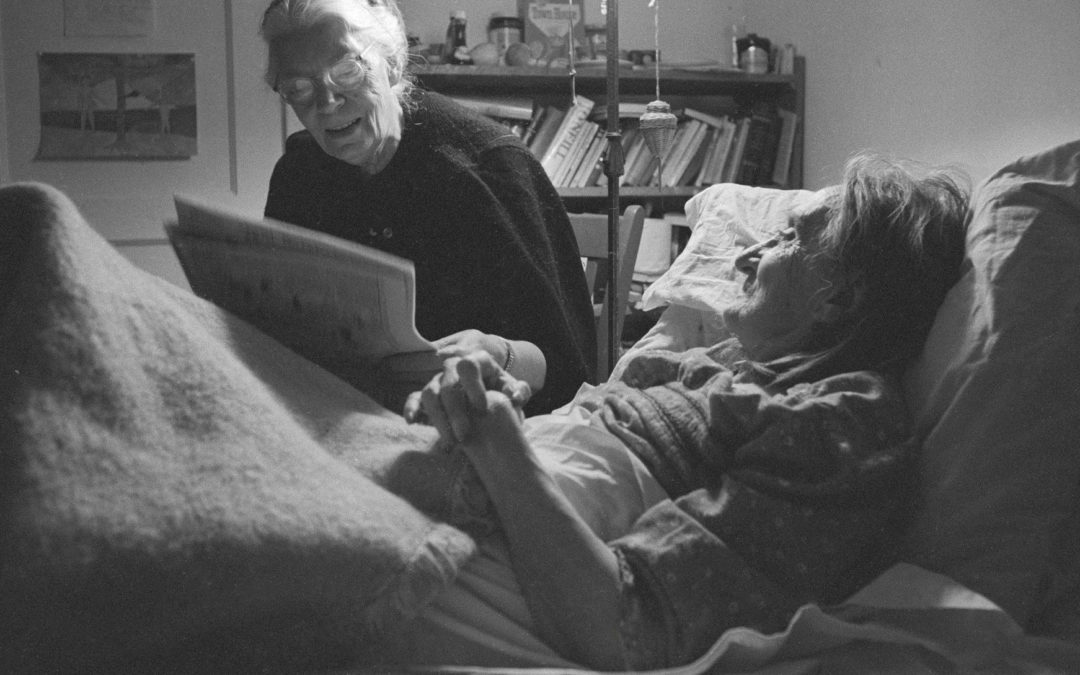 The spiritual works of mercy are to admonish the sinner, to instruct the ignorant, to counsel the doubtful, to comfort the sorrowful, to bear wrongs patiently, to forgive all injuries, and to pray for the living and the dead.

The corporal works of mercy are to feed the hungry, to give drink to the thirsty, to clothe the naked, to ransom the captive, to harbor the harborless, to visit the sick, and to bury the dead.

When Peter Maurin talked about the necessity of practicing the works of mercy, he meant all of them. He envisioned houses of hospitality in poor parishes in every city of the country, where these precepts of our Lord could be put into effect. He pointed out that we have turned to the state through home relief, social legislation, and social security, that we no longer practice personal responsibility, but are repeating the words of the first murderer, “Am I my brother’s keeper?”

The works of mercy are a wonderful stimulus to our growth in faith as well as love. Our faith is taxed to the utmost and so grows through this strain put upon it. It is pruned again and again, and springs up bearing much fruit. For anyone starting to live literally the words of the fathers of the church – “The bread you retain belongs to the hungry, the dress you lock up is the property of the naked”; “What is superfluous for one’s need is to be regarded as plunder if one retains it for one’s self” – there is always a trial ahead. “Our faith, more precious than gold, must be tried as though by fire.”

Here is a letter we received today: “I took a gentleman seemingly in need of spiritual and temporal guidance into my home on a Sunday afternoon. I let him have a nap on my bed, went through the want ads with him, made coffee and sandwiches for him, and when he left, I found my wallet had gone also.”

I can only say that the saints would only bow their heads, and not try to understand or judge. … These things happened for our testing. We are sowing the seed of love, and we are not living in the harvest time. We must love to the point of folly, and we are indeed fools, as our Lord himself was who died for such a one as this. We lay down our lives, too, when we have performed so painfully thankless acts, for our correspondent is poor in this world’s goods. It is agony to go through such bitter experiences, because we all want to love, we desire with a great longing to love our fellow human beings, and our hearts are often crushed at such rejections. But, as a Carmelite nun said to me last week, “It is the crushed heart which is the soft heart, the tender heart.”

St. Francis was “the little poor man” and none was more joyful than he; yet Francis began with tears, with fear and trembling, hiding in a cave from his irate father. He had expropriated some of his father’s goods (which he considered his rightful inheritance) in order to repair a church and rectory where he meant to live. It was only later that he came to love Lady Poverty. He took it little by little; it seemed to grow on him. Perhaps kissing the leper was the great step that freed him not only from fastidiousness and a fear of disease but from attachment to worldly goods as well.

Sometimes it takes but one step. We would like to think it is always so. And yet the older I get, the more I see that life is made up of many steps, and they are very small affairs, not giant strides. I have “kissed a leper,” not once but twice – consciously – and I cannot say I am much the better for it.

The first time was early one morning on the steps of Precious Blood Church. A woman with cancer of the face was begging (beggars are allowed only in the slums) and when I gave her money (no sacrifice on my part but merely passing on alms which someone had given me) she tried to kiss my hand. The only thing I could do was kiss her dirty old face with the gaping hole in it where an eye and a nose had been. It sounds like a heroic deed but it was not. One gets used to ugliness so quickly. What we avert our eyes from one day is easily borne the next when we have learned a little more about love. Nurses know this, and so do mothers.

Another time I was refusing a bed to a drunken prostitute with a huge, toothless, rouged mouth, a nightmare of a mouth. She had been raising a disturbance in the [community] house. I kept remembering how Saint Therese said that when you had to refuse anyone anything, you could at least do it so that the person went away a bit happier. I had to deny her a bed but when that woman asked me to kiss her, I did, and it was a loathsome thing, the way she did it. It was scarcely a mark of normal human affection.

We suffer these things and they fade from memory. But daily, hourly, to give up our own possessions and especially to subordinate our own impulses and wishes to others – these are hard, hard things; and I don’t think they ever get any easier.

We have repeated so many times that those who have two coats should follow the early church fathers who said, “The coat that hangs in your closet belongs to the poor.” And those who have a ten-room house can well share it with those who have none. How many large houses could be made into several apartments to take in others? Much hospitality could be given to relieve the grave suffering today. But people are afraid. They do not know where it will end. They have all gone far enough in generosity to know that an ordeal is ahead, that the person taken in will most likely turn into “the friend of the family.” No use starting something that you cannot finish, they say. Once bitten is twice shy. We have all had our experiences of ingratitude, of nursing a viper in our bosom, as the saying goes. So we forget about the necessity of pruning, in the natural order, to attain much fruit. We don’t want to pay the cost of love. We do not want to exercise our capacity to love.

There are many stories one could tell about Catholic Worker life, but it is always better to wait until years have passed so that they become more impersonal, less apt to be identified with this one or that.

There is a story, however, about a reader of the paper, and this happened long enough ago so that we can tell it. Our friend adopted a young girl and educated her, and the young girl proved to be a great joy and comfort. Now she has entered a contemplative order to spend her life in prayer and work. The same reader then took in another young woman, who brought home a fatherless baby, and when that was forgiven her, went out and brought in still another, and there was apt to be a third. Our friend wrote and begged us for advice and help as to what to do. Was she contributing to the delinquency of this girl by forgiving seventy times seven, and was she perhaps going to have seventy times seven children to take care of?

It is good to think of the prophet Hosea, whom I have mentioned before in writing on love. He was commanded by God to take a harlot to wife, and she had many children by other men. He was a dignified, respected teacher of his people, and he was shamed and humiliated by the wife of his bosom. Yet he was to go down in history as the type of the love of God for his adulterous people.

We may be living in a desert when it comes to such perceptions now, and that desert may stretch out before us for years. But a thousand years are as one day in the sight of God, and soon we will know as we are known. Until then we will have glimpses of community in play, in suffering, in serving, and we will begin to train for that community.